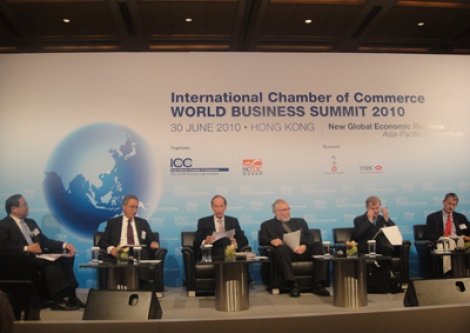 Economic experts said that the world's leaders are at an important crossroads as they tackle the question of how to press forward following the worst recession in decades. The Global Business Summit held in Hong Kong on June 30th, 2010, was titled "the new global economic realities: the perspective of Asia - Pacific," and organized by the International Chamber of Commerce in cooperation with the Trade Development Council in Hong Kong.

Speakers and delegates at the summit agreed that trade, employment, and sustainable development are key drivers of economic recovery and future growth. Victor K. Fung, Chairman of ICC, explained that following the financial crisis and economic downturn of 2008-2009, the ICC felt it was important to talk about how the future global economy has been shaped by these events and what they can do to help ensure its stability and growth. The Summit also gave particular emphasis to Asia-Pacific, the driver of the global economy and the region that proved most resilient during the economic downturn. Green issues and sectors were key focus areas during the Summit. The Summit involved more than 400 participants, most of whom were senior management, business leaders and opinion leaders from around the region and the world.