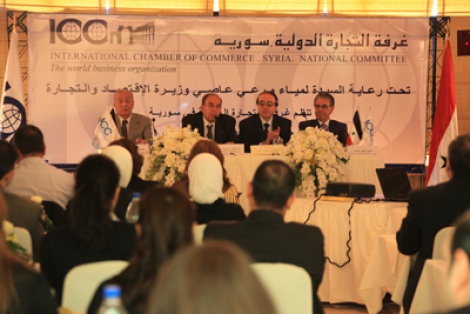 A Specialized symposium on (Incoterms® 2010)

Under the patronage of the Syrian Minister of Economy and Trade Lamia Assi, the International Chamber of Commerce in Syria (ICC-Syria) held a specialized symposium on (Incoterms® 2010), the new official rules for the interpretation of terms and rules of international trade, at the Carlton Hotel in Damascus, on 12 October 2010.

Dr. Attar pointed out that (Incoterms® 2010), the amended version of (Incoterms® 2000), will enter into effect early next year taking into account the great technological development in business processes.

For his part, Deputy Minister of Economy and Trade Ghassan Al-Eid said that the ministry is applying the social market economy approach gradually in the interest of the national economy. He pointed out that the ministry has been amending many laws relating to the trade work and the business environment in general, in order to keep pace with the development in international trade.

Eid referred to the ministry's contribution on Syria's investment environment development which is witnessing an increasing activity especially after opening private banks and insurance companies in addition to the projects of developing transport networks of roads, railways, and ports which is accompanied by continuous development in the legislative and legal side.

For his part, David Lowe, an international expert and Chair of the Commercial Law and Commercial Practice at the ICC UK, said that (Incoterms® 2010) makes use of the great technology development in business processes and its effect has extended all goods transfer processes of all means in order to ensure a smooth transition.