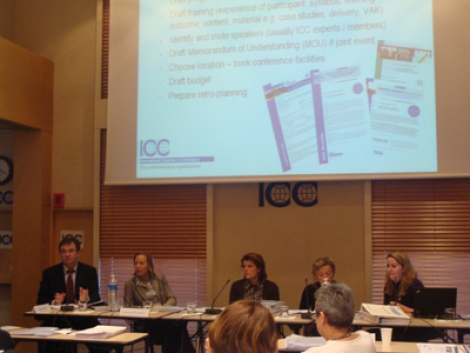 With Syrian participation, a training course for NC ICC

In reference to the invitation extended by ICC-Paris to its National Committees to take part in the training activities at its Head Office in Paris, a training course was held during 24-27 January, in which Syria side was represented by the ICC-Syria Secretary General Mr. Naji Shaoui, ICC-Syria Legal Advisor Mr. Hussein Khaddour and ICC-Syria Executive Director Ms. Mirna Nayfeh.

During the training course, the duties, departments, mechanisms of all ICC affiliated committees and working group were discussed in details, in addition to the workshops of conducted by each committee.

The Director of ICC Commercial Practice Law Committee Emily O'Connor focused on the effects exerted by the workshop held to review Incoterms and issue the new edition Ms. O'Connor also underlined the issue of protecting the intellectual property of Incoterms, and the need to observe them. On her part, the Director of Intellectual Property and Competition Committee Daffney Young Derf gave two presentations on combating counterfeiting and piracy and the intellectual property roadmap for businessmen.