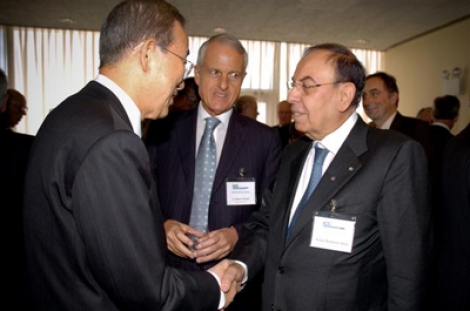 Dr. Abdul Rahman Attar, President of the International Chamber of Commerce in Syria (ICC Syria), affirmed to Ban Ki-moon, Secretary-General of the United Nations (UN), that peace in the Middle East is a necessary tool for the development of the local and international economy.
Dr. Attar made the remarks during a session which brought together the Executive Board of the International Chamber of Commerce (ICC) and the Secretary General of the UN, at the UN headquarters in New York. The session took place on the sideline of the Executive Board of the ICC meeting held in New York between the 8th and 12th of October 2009.

In cooperation with the U.S. Council for International Business, the ICC Executive Board meeting focused on putting a strategy in place for the chamber for the next three years. The U.S. Council for International Business, one of the strongest U.S. economic organizations, hosted a gala dinner for the gathering, attended by U.S. Secretary of Commerce and a number of Arab ambassadors, including Dr. Bashar Jaafari, Syria's Permanent Representative to the United Nations.

The ICC Executive Board also visited Harvard University where senior academics at the university explained their perceptions of the global economy, both now and in the future. Issues discussed included corporate governance, the role of the state in the economy, climate change, the development and drafting of financial laws, and the revival of bilateral, regional, and strategic trade agreements for integrated business.