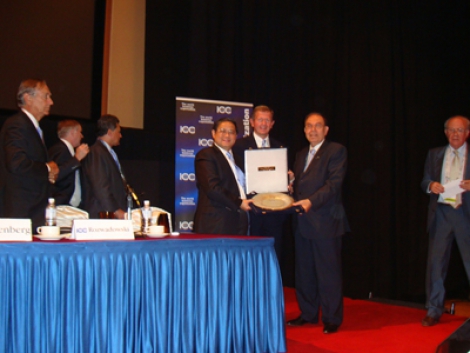 During the same meeting, the nomination of Mr. Jean Rozwadowski was also accepted as Secretary General of the International Chamber of Commerce beginning July 1, 2009. The congress, organized by the World Chambers Federation WCF, one of the institutions of the International Chamber of Commerce (ICC), and hosted by the Federation of Malaysian Manufacturers, was attended by more than 14,000 Chambers of Commerce from all around the world.

The congress's three public meetings addressed a number of important topics. The most important of these were:
- Global challenges, including how trends in demographics, migration and industrialization are placing stress on the planet's basic resources.
- Food, water and energy shortages
- The implications climate change will have on the global economy.

In addition to the plenary sessions, there were 24 workshops divided into three tracks – business, development, and chamber issues. Dr. Abdul Rahman Attar, President of the International Chamber of Commerce Syria (ICC Syria), chaired the Syrian delegation at the congress. The ICC was founded in 1919 and is celebrating its 90th anniversary this year.