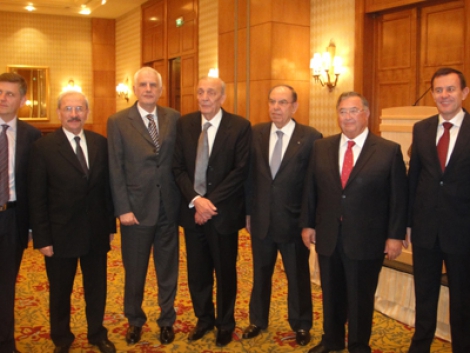 An honoring dinner for Dr. Attar

Mr. Ehssan Ba'albaki, a friend of the Attars, held a dinner party in honor of Dr. Abdul Rahman Attar on the occasion of his election as a member of the Executive Board of the International Chamber of Commerce - Paris, on Thursday, January 20, 2011 at the Four Seasons Hotel in Damascus.

The dinner was attended by a group of businessmen and friends of both families. Dr. Attar gave a speech in which he referred to the relationships between the two families and thanked the Ba'albakis for this event: "The Ba'albakis offer a new idea based on the past constants, and this is a blessed practice. It's a call for all of us to be on friendly terms, merciful and united; a move that is in the core of the profound concept of trader, i.e. piety, honesty, courage and mercy."