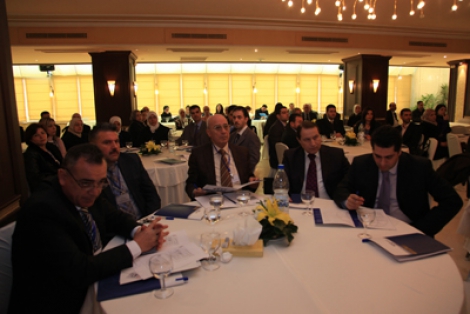 Under the patronage of the Central Bank of Syria Governor Dr. Adeeb Mayalah, a seminar entitled "Collateral and Letter of Guarantee in Syrian Laws and the Importance of applying URDG" was conducted by ICC in Syria and Jordan.

The seminar was was attended by a number of officials from public and private banks, representatives of the Council of Ministers and a number of individuals concerned.

The seminar focused on harmonization between Syrian domestic laws and international rules and regulations in regard to collateral and guarantee and the implementation and circulation URDG. In his address to the seminar, President of ICC-Syria Dr. Abdul Rahman Attar pointed out that the seminar represents the fruit of cooperation between ICC-Syria and ICC-Jordan and that there are continuous efforts to transfer international experience and facilitate activities in the business community on a constant basis.

In his address, CBS Governor Dr. Adeeb Mayalah commended the role of the presidents of ICC-Syrian and ICC-Jordan and appreciated their efforts designed to reform the financial and monetary sector and he underlined the recently issued the laws and regulations.

On his behalf, President of ICC-Jordan Dr. Mohammed Asfour emphasized the importance of using and circulating URDG globally.