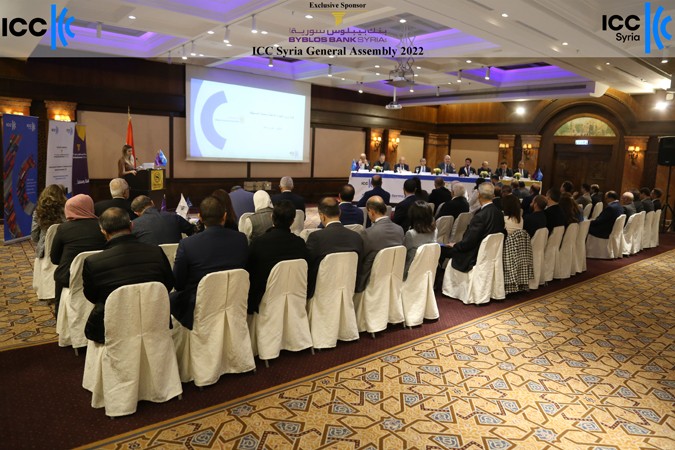 H.E. Dr. Amro Salem Minister of Internal Trade and Consumer Protection attended the General Assembly for the year 2022 of the International Chamber of Commerce Syria (ICC Syria), which was held at Sheraton Damascus Hotel on Wednesday November 16, 2022, exclusively sponsored by Byblos Bank Syria.

Were present, as well, representatives of the Ministry of Internal Trade and Consumer Protection, Corporates Directorate and ICC Board Members and members within the quorum limitation as defined by the bylaws of the International Chamber of Commerce Syria.

Mr. Chaoui assured that ICC Syria continued to engage with the national stakeholders, as well as on the level of the International Chamber of Commerce, through its participation in the international conferences, and the various ICC commissions.

H.E. Dr. Salem addressed the Session and stressed on the importance of the role that ICC plays as a regulator of the International Trade in the world, as well as, the role of ICC Syria and all Chambers of Commerce and Industry to strengthen the country’s economy.

Moreover, he focused on the positive role of the private banks, as an important gateway to revitalizing the national economy. Banks are reliable entities, especially since they operate under the supervision of the Central Bank of Syria, which relieves the banks’ clients. Banks will help solving the economic problems, either in providing liquidity or facilitating trade transactions and withdrawals without obstacles.

Members of ICC Banking Commissions have shared their experiences, best practices and updates of the banking sector, which Mr. Bechara conveyed to the members of the General Assembly.

Ms. Mouna Kiwan the Administrative Consultant and Coordinator of International Affairs, provided information about ICC Commissions: Arbitration, Banking, Intellectual Property, Insurance  and Commercial Law and Practices with an overview about the ICC Academy, which provides international accredited courses in the fields of trade, finance, banking and institutional work.

The budget for 2021 was approved by the members of the General Assembly.

The GA was followed by honoring ICC Syria's sponsors during the year 2022, and a cocktail party at Sheraton Damascus Hotel.