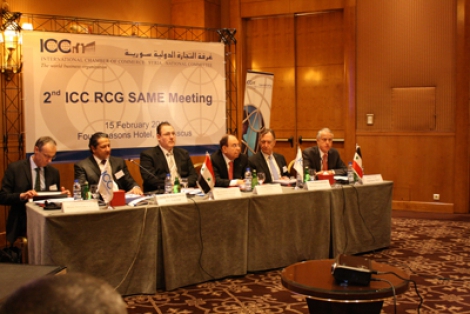 On February 15, 2010, the ICC Syria hosted the second meeting of the ICC Regional Consultative Group for South Asia and the Middle East. The meeting, which took place at the Four Seasons Hotel – Damascus, was held under the theme "Business- the leading factor in increasing international cooperation, understanding, trade & investment." The topics of discussion at the meeting included regional trade, finance, tariffs, and international markets, as well as the ICC's role in promoting cooperation, and facilitating the understanding of trade and investment.

In his opening speech, Mr. Abdullah al-Dardari, Deputy Prime Minister of Economic Affairs, spoke of the importance of cooperation with the ICC in transferring technological knowledge to Syria. He called on the ICC Syria to provide training on existing open trade systems, and to promotion cooperation and competition among its members. Dardari also drew attention to the important role played by the ICC Syria in helping Syria to develop as a bridge between Europe and the Arabian Gulf.

This meeting was attended by Jean Roswadowski, the Secretary-General of the ICC, Rona Yircali, President of the World Chambers Federation, as well as ICC Presidents and Secretary-Generals from Pakistan, Sri Lanka, India, Iran, Lebanon, Jordan, Georgia, United Arab Emirates, Bahrain and Kuwait.

The meeting was one of a series of regional meetings aimed at gathering members facing similar challenges, and helping them to discuss their views about how to access and implement the best business practices from around the world.