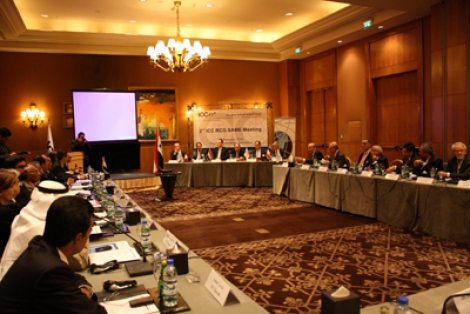 Within the framework of his official visit to Syria on February 16th, 2010, Jean Rozwadowski, ICC Secretary-General, visited Lamia Assi, Syrian Minister of Economy and Trade. Rozwadowski was visiting Syria to participate in the second meeting of the ICC Regional Consultative Group for South Asia and the Middle East.

Dr. Abdul Rahman Attar, President of ICC Syria, accompanied Rozwadowski to visit Assi. During the official visit, they reviewed the ICC's areas of work, the activities currently being undertaken by the chamber, as well as the mechanism of the chamber's sub-committees - particularly in the fields of investment, banking, insurance, and electronic commerce. In addition, Dr. Attar reinforced ICC Syria's intentions of providing the ministry with all studies, plans, and recommendations issued by the chamber. He also expressed the need for the ministry to designate a representative to follow up on all matters relating to the ICC.

Mr. Rozwadowski and Dr. Attar also discussed the modifications done by the ICC, on "Uniform Rules for Demand Guarantees" (URDG) and how to implement these guarantees in Syria, with Adeeb Mayaleh, Governor of the Central Bank of Syria. Mayaleh welcomed the idea of hosting the coming symposium under the auspices Central Bank of Syria, a forthcoming event which will be organized by the ICC Syria concerning these modifications. All banks operating in Syria – both public and private - will be invited to the symposium to discuss these changes and to facilitate cooperation between the ICC Syria and the Central Bank of Syria. Furthermore, topics relating to documentary credits and banking regulations issued by the ICC were also discussed, as well as topics related to the ICC court, one of the preeminent arbitration centers in the world.