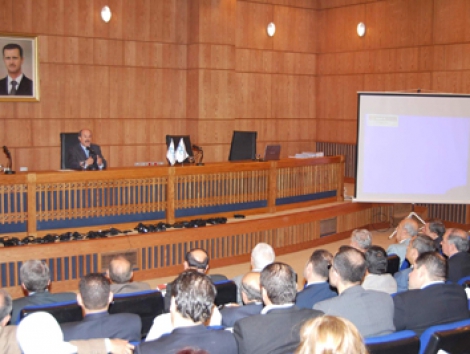 Under the patronage of the Deputy Prime Minister for Economic Affairs, Mr. Abdullah al-Dardari, the International Chamber of Commerce in Syria (ICC Syria) held a symposium regarding partnerships between the public and private sectors. The symposium took place in the presence of experts from Trowers & Hamlins and Pinsent Masons LLP, on Monday, May 25, 2009 at the headquarters of the Presidency of the Council of Ministers.

During the symposium, the British delegation conducted a session outlining the nature of partnerships between the public and private sectors in the UK - negotiations of public-private contracts, the setting of terms and conditions, as well as the implementation of such projects.

In attendance, was the Minister of Transport, Dr. Yarob Sulaiman Badr, the Minister of Electricity, Dr. Ahmed Qusai Kayali, ICC Syria President, Dr. Abdul Rahman Attar, and the British Ambassador. Additionally, around 140 people attended the event from a large number of private and governmental organizations.

Speaking at the symposium's opening session, Dr. Attar stressed that the ICC Syria has always worked to be Syria's window to the world, and always acted as a conduit to transfer experiences. He added that the most important part of the symposium was to motivate the private and public sector to join hands for the benefit of Syria.