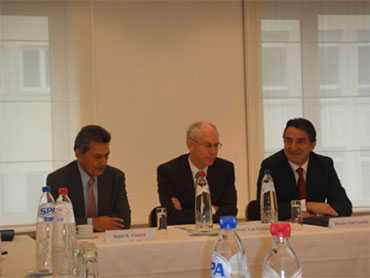 ICC Executive Board meets in Brussels

The International Chamber of Commerce (ICC) Executive Board held a session in Brussels on November 18th and 19th, 2010 in the presence of Dr. Abdul Rahman Attar, ICC Executive Board member.

The meeting was marked by the participation of Herman Van Pompuy, President of the European Council and Frederik Erixon ,Director of the European Centre for International Political Economy (ECIPE), Brussels.

The board addressed the role of ICC vis-à-vis the G20 meeting in Seoul on November 11th, 2010. They also approved the ICC Programme of Action 2011 and other policy documents including ICC Model International Franchise Agreement, Policy Roadmap on Finance and Climate Change and ICC Guidelines on Agents, Intermediaries and Other Third Parties.