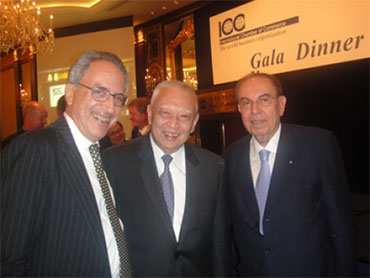 The International Chamber of Commerce (ICC) Executive Board held its meeting in Hong Kong between June 27th and 30th, 2010. The meeting discussed many topics concerning the work of ICC commissions. In addition to ICC's plan of action for the next three years, the meeting discussed ICC'S financial report, relations with the United Nations, and dates for future meetings of the ICC's Executive Board. The meeting also discussed the dispute resolution services offered by the ICC and a number of issues related to the World Chambers Federation. Additionally, the meeting also approved the financial accounts for the year 2009.

The ICC World Council elected Rajat Gupta Chairman of the ICC, and Stephen Green ICC Vice-Chairman. The new leaders will stay in their new positions for two year starting from June 1st. Later on, the meeting appointed new members of the ICC Court of Arbitration. In addition to discussing the developments in some ICC national committees, the meeting discussed a report on the ICC's participations at the G8 and G20 Summits.
Dr. Abdul Rahman Attar, International Chamber of Commerce (ICC) Executive Board Member and President of the of the International Chamber of Commerce - Syria (ICC-Syria), participated at the meetings. At the end of the meeting, Martin Wolf, Associate Editor and Chief Economics Commentator at the Financial Times, gave a presentation on the current state of global economic events.