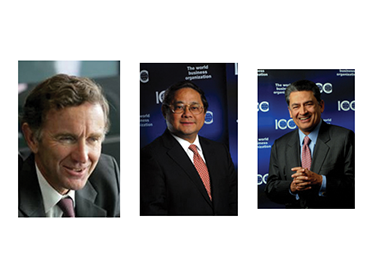 New elections into the ICC

Gupta, who served as the United Nations Secretary-General's Special Advisor on UN Reform, considered the ICC Chairmanship to be an 'honour and an opportunity.' Gupta, an Indian national who resides in the US, has held a range of top management posts at McKinsey during his 34 years with the firm. He is also Chairman of the Board of the Indian School of Business, Board of Associates of the Harvard Business School, Chairman Emeritus of the Global Fund for AIDS, Tuberculosis and Malaria, and Chairman of the Public Health Foundation of India.
Dr. Abdul Rahman Attar, ICC Executive Board and the Arab representative at the chamber, called Mr. Gupta, an outstanding person, especially in his field of owrk at the McKinsey & Company and his presence will support the ICC in attending to all of the major economic files in the world.

Victor K. Fung, Chairman of the Li & Fung group of companies, became ICC Honorary Chairman after two years as ICC Chairman. Fung will continue to serve as Chairman of the ICC Research Foundation which was founded under his chairmanship.

Accepting the post of ICC Vice-Chairman, Green said: "The ICC has been a strong advocate of open markets and sustainable development. These are principles I fully support." He cited his company's record on environmental issues, noting that HSBC has become "carbon neutral" in its own business. HSBC is the world's largest banking and financial services group, with more than 300,000 employees in 88 countries and territories.

Green currently serves as HSBC Group Chairman, based in London, which is considered to be the world's largest banking and financial services group. Green, who holds degrees from Oxford University and Massachusetts Institute of Technology, has been working with HSBC for 28 years. Green began his career with the British government's Ministry of Overseas Development, and he is still serving on a number of private and governmental boards apart from his corporate responsibilities.