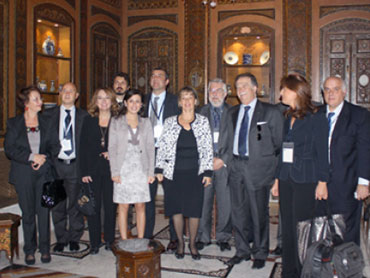 A delegation from Palermo Chamber of Commerce visited Syria between November 11th-15th, 2010, where the International Chamber of Commerce in Syria (ICC Syria) organized the visit in cooperation with Damascus and Aleppo Chambers of Commerce. The delegation included a group of Italian businessmen and businesswomen from the sectors of tourism, energy, agro-food industries, furniture and medical equipment and devices.

The parties held meetings and round tables at the Damascus Chamber of Commerce where they discussed areas of trade and investment cooperation, opportunities available in the Syrian and Italian markets, and ways to strengthen the balance of trade. The parties also discussed the diversification exchanged of goods, efforts made to overcome obstacles facing joint work, and the appropriate mechanisms of building partnerships between businessmen in both countries.

Dr. Abdul Rahman Attar, President of ICC-Syria, and member of the Arab - Italian Chamber of Commerce, said that the "old" relations with Palermo comes from "its geographical location close to Syria" pointing to "many areas and sectors which have not yet been discovered on the two sides and should be worked on in order to get the benefit from them."

Dr. Attar added that Italy is working on training Syrians in several areas such as tourism and monuments restoration. He also pointed to the possibility of training other Syrians in Italy in other areas. Attar also pointed to the possibility of Palermo Chamber of Commerce - and Italy in general - to contribute to assist Syrian companies - small and medium-sized enterprises in particular - and to provide them with the Italian experience, knowing that 90 percent of Italian companies are small and medium-sized. Attar finally pointed to "Palermo Chamber of Commerce desire to be a focal point for cooperation Syrian - Italian."
Mohammad Ghassan Al Qallaa, President of the Federation of Syrian Chambers of Commerce, considered Italy - until 2008 - "As the main and first European partner of Syria not only in import and export, but in different areas as well."

Qallaa stressed the fact that Syria is interested in agricultural products manufacturing calling the Italian businessmen to participate and invest in these products due to Italy's vast experience in this field. Qallaa also called for a Syrian - Italian cooperation including Syrian producers and Italian designers and importers in clothes and textile, and then to deepen cooperation to include the tourism sector especially medical tourism.

Italy is one of Syria's primary European trade partners, with a trade exchange volume of SYP 94,310 billions, SYP 55,146 billions of which as Syrian exports, whereas the imports amounted to SYP 39,164 billions.