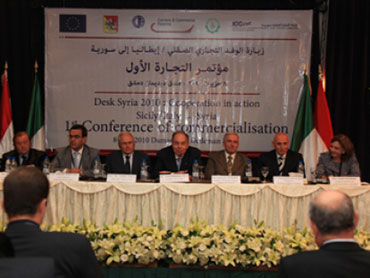 On June 8th, 2010 in Damascus, the International Chamber of Commerce -Syria (ICC-Syria), in cooperation with the Federation of Syrian Chambers of Commerce, held the First Conference of Commerce in the presence of a high-level Italian commercial delegation.

Dr. Abdul Rahman Attar, President ICC Syria, stressed that his country would move forward in adopting Italy as a portal of Syrian exports to Europe. Attar explained that Italy could be a bridge for all of Europe to Syria and that Syria is very well suited for the Mediterranean relationship. Attar described the conference as the beginning of joint work between Syrian and Italian companies, saying that Italian machines are already present at every factory in Syria.

Mohammad Ghassan Al Qallaa, President of the Federation of Syrian Chambers of Commerce, pointed out that the commercial relations between Syria and Italy have been firmly-established since the signing of the first trade deal between the two countries in 1950. In turn, H.E. Achille Amerio, the Italian Ambassador in Syria, spoke of the depth of economic relations between the two countries, adding that Syria plays a vital role especially since it is a transit point for all economic activities.

The opening session concluded with a lecture and presentation by Luigi Genuardi, President of the Italian delegation, and Board Member of Directors of Palermo Chamber of Commerce. The lecture, titled 'Sicily and its entrepreneurial world' - presented a brief on the Chamber of Commerce, Industry, Handicrafts, and Agriculture in Palermo. Later on, during the four main roundtables, participants discussed strategies of cooperation, cultural goods, restoration's techniques, handicrafts, the agro-food sector, tourism, the environment, and fisheries.